Back in December, Microsoft published a blog (Windows 10 Creators Update advances security and best-in-class modern IT tools) where they mentioned a conversion tool for making the conversion to UEFI:

We’ve heard from our customers that they want to take advantage of new Windows 10 security investments like Device Guard on their existing modern hardware, but many of these new features require UEFI-enabled devices. For those customers who have already provisioned modern Windows PCs that support UEFI but installed Windows 7 using legacy BIOS, converting a device to UEFI required an IT manager to repartition the disc and reconfigure the firmware. This meant they would need to physically touch each device in their enterprise. With the Creators Update, we will introduce a simple conversion tool that automates this previously manual work. This conversion tool can be integrated with management tools such as System Center Configuration Manager (ConfigMgr)* as part of the Windows 7 to Windows 10 in-place upgrade process.”

I disagree with their statement that you need to physically touch each device in the enterprise in order to make the conversion to UEFI, as I have engineered the process that we have been using at 1E in our Windows 10 Now solution since last year. However, in order to do the conversion and to be supported (which the 1E Windows 10 Now Solution is 100% supported) you need to completely format and partition the in order to change it from MBR to GPT. This presents other challenges, such as backing up and restoring user data and re-installing applications. There are other unsupported solutions out there (like GPTGen) that I know other vendors use that enable you to switch the disk layout from MBR to GPT without formatting and partitioning the disk, but I would steer clear of these solutions (and vendors) in order to continue to be supported by Microsoft.

In the Microsoft blog, they only made a mention of the ‘simple conversion tool’ and did not provide any details about it (like when to expect it, how to use it, etc.). Well, there was a nice little surprise that showed up in build 15007 of the Windows 10 Enterprise Insider Preview called MBR2GPT.EXE 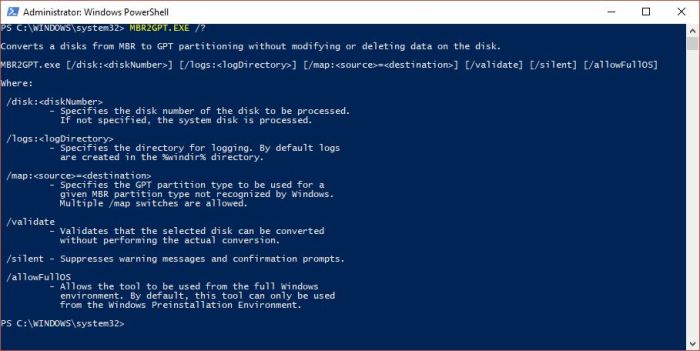 This looks like the conversion utility that the blog post mentioned. Other than the MBR2GPT help, there is not much information about the utility and what versions of Windows 10 that will be supported. With this tool, more machines will qualify for an in-place upgrade (like machines that are currently running BIOS). There are still some in-place upgrade limitations out there, like 3rd party disk encryption (unless the vendor now supports in-place upgrade) or changing between architectures or base OS languages, that will still require a wipe-and-load approach (see Johan’s post Windows 10 Upgrade Limitations for a few others).

The other thing that needs to be done when using MBR2GPT is to set the correct vendor specific BIOS settings changes so that the system will boot UEFI after converting the disk layout. The order of the settings does matter and settings can vary among models from the same vendor. I have previously blogged about (Automating Dell BIOS-UEFI Standards for Windows 10) how to do this for Dell (they have the most consistent BIOS settings out of everyone). We also have a BIOS to UEFI tool that only comes with Nomad that abstracts all of the vendor settings that I have blogged about (Getting Started with 1E BIOS to UEFI) that has a slick UI in the form of a Task Sequence step. 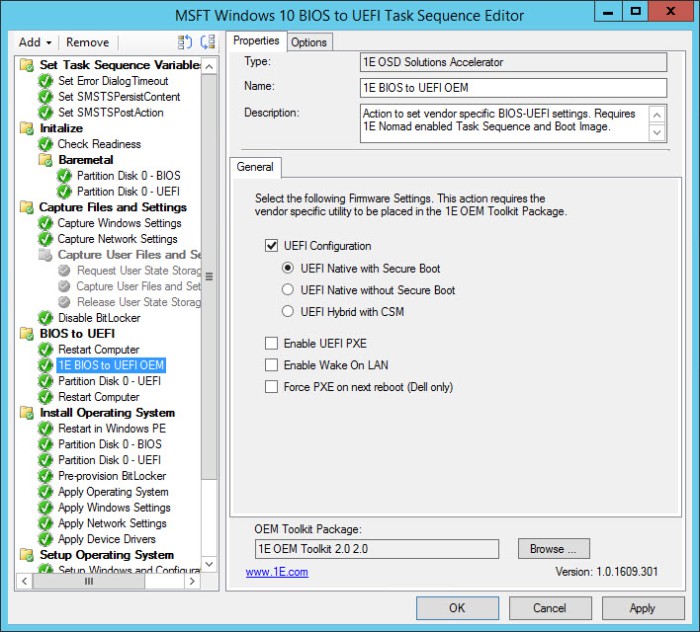 (Yea, I know, I have heard from many of you that 1E should offer this as a stand alone tool – feel free to let them know at info@1e.com.)

In my next post, Getting Started with MBR2GPT, we will talk a look at this tool in action and keep in mind that this is pre-release software for now so do not use it in production yet!