If you have already started working with UEFI devices, then you have probably figured out a few of the gotchas when it comes to booting these devices. First, you need to boot the device using the native architecture. So, if the device you are attempting to boot is a 64-bit device, then it needs to boot with a 64-bit boot image. Second, if you are using a USB Flash Drive, then you probably have realized that UEFI devices will not boot from a NTFS formatted flash drive. The flash drive needs to be formatted using FAT32 in order to boot UEFI. That is all fine and dandy, but what happens if you have a large WIM file (one that is greater than 4GB, like the Windows Server 2016 install.wim that is 4.38GB) that you need to copy onto the flash drive? The short answer is that you can’t, at least on the FAT32 partition. You can always split the WIM, but what fun is that? Plus, it sounds like extra work to me. Lucky for you, with the right USB flash drive and the information in this blog post, I will show you have you can fit that 4+GB WIM on your flash drive and still boot UEFI (because if you are still using BIOS, stop reading now and switch your system to UEFI).

The trick is to create multiple partitions on your flash drive, just like you do (or like Windows setup does for you) when you install Windows in UEFI mode. The problem is a limitation for creating multiple partitions on removable media. By flipping the ‘removable bit’ on the flash drive, you can then use diskpart to create a bootable FAT32 partition (large enough to fit all of the boot files) and then a second NTFS partition that contains the large WIM file (along with the other setup files that are needed. There are a few utilities out there on the Internet, like BootIT from Lexar (although I could not get it to work on some new Lexar USB flash drives that I just bought), that may or may not do the trick for you (NOTE: this does not work on all USB flash drives and you might toast your flash drive so use at your own risk). There are also some other tools that you might come across if you search long enough (and on some sketchy sites), but once again – use at your own risk. Hopefully one day soon, Windows will allow us to partition removable media since eventually most devices will be class 3 UEFI and WIM files are getting larger, not smaller.

Lucky for me, the SanDisk Ultra 16GB (Model SDCZ45-016G), which I bought at Costco several years ago, already shows up as a basic disk type (in other words, not removable), and allows me to create multiple partitions so that I can make it bootable in a UEFI configured system and still have the ability to copy large WIM files onto it. 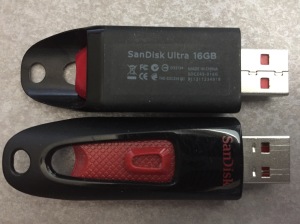 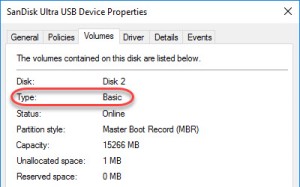 It also looks like these are still available on Amazon (although I cannot guarantee that they are like the Costco model apart from the matching characters on the model number).

Now you should be able to boot right up using the USB flash drive in UEFI mode and in this case proceed to install Windows Server 2016.