If you have ever done OSD, then chances are you have had to open up CMTrace a time or two to look at the smsts.log file. CMTrace displays one of the most annoying pop up boxes of all times and it is usually hiding behind the running task sequence dialog window: “Do you want to make this program the default viewer for log files?” 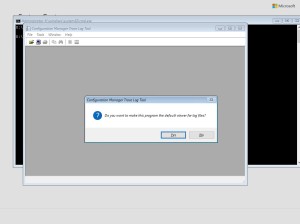 The answer is yes for the millionth time! Wouldn’t it be nice if it just did this automatically and never asked you again? If I had to guess, I bet you are shaking your head yes. For this post, I am going to show you how to modify your boot images so that it never asks you this annoying question again while running in WinPE.

Several years ago (back in 2009) I developed a solution on how to automatically open CMTrace (called Trace32 back in those days) for a debug task sequence. I finally got around to blogging the solution a few years ago and it is called ConfigMgr 2012 OSD: Automatically Open SMSTS log. This contains the important registry keys that we need to set in order to bake this into our boot images (and thus eliminating these three steps for the WinPE phases).

If everything worked right, CMTrace will open up without asking you “Do you want to make this program the default viewer for log files?”, as it already knows the answer. Repeat for other boot images you would like to modify. Here is a link to a text file that can be downloaded and renamed to .bat.

If you think this should automatically be in Configuration Manager, head on over to User Voice and vote for Stop CMTrace from asking us if we want to use it as the default viewer for log files in WinPE.