Rewind – several years ago (back in the ConfigMgr 2007 days) I was working on an OSD project. While we were brainstorming ideas on what we could do to make the process better and more resilient, I came up with the idea of staging content during a running Task Sequence. The thought was, if we know that we were going to need something (like the WIM, Driver Package, CM Client, etc.), wouldn’t it be good if we could get it before we started the main execution phase of the Task Sequence. Instead of waiting until we were in WinPE (after the disk had already been wiped) and experienced a failure (maybe a network glitch), we could be proactive by staging only the critical content ahead of time. This way, we can get past the point of no return in the Task Sequence, minimize failure and have a useable system with at least the new OS installed. This is when the concept of Pre-staging Content Using Nomad was born.

This feature first appeared in 1E Nomad version 4.1 for ConfigMgr 2007. It has been in every version of Nomad since that time and this functionality extends both ConfigMgr 2007 and ConfigMgr 2012/R2. To make things easy, there is a custom action in the Task Sequence editor called Pre-stage Content Using Nomad. Simply add the step to the Task Sequence and select the Packages that are required during WinPE and OOBE. 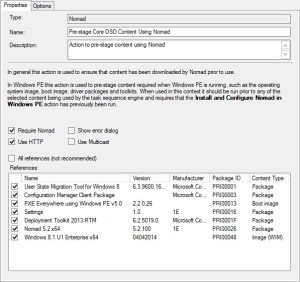 The Pre-stage step works in WinPE as well as a full OS, so pre-staging can be done under a Baremetal scenario as well as the Refresh scenario (and very soon the Upgrade scenario for Windows 10). The Pre-stage concept is also helpful when needing to perform OSD Refresh over WiFi. Since there is not any WiFi support in the current version of WinPE, simply pre-stage the necessary content before rebooting into WinPE.

If you have used this feature and like it or have other suggests, let me know!