My Tesla journey started off back in March of 2019. Having been a car guy growing up, I started determining how long I was going to keep a car (mainly my daily drivers) based on number of years and/or number of miles. Before getting married and having kids, these numbers were around the 6 years/100K mile range. But later in life, it made sense to extend that out to 10 years. In spring of 2019, my wife’s Honda Odyssey was approaching 10 years old and had just over 160K miles on it. It had been a pretty good car in terms of reliability but it was starting to have some wear and tear items starting to go out and needing to be replaced. So it was time to start looking for a replacement. She liked the SUV size vehicles and we started considering an Acura MDX and the Honda Pilot, since they both have decent acceleration due to a V6 engine. For those of you that know me, you know that I like my cars to go when I press the accelerator which meant that the smaller SUVs with a 4 cylinder (even turbocharged) don’t cut it for me.

Just on a whim, I suggested to my wife about getting a Tesla. The cost was going to be about the same and I had a couple of friends that had gotten the Tesla Model 3 when it first came out. Since they lived in different states, I only ever heard about them and never got to ride in them. My good friend Keith Garner was constantly talking about his car. Being a car guy, I kind of got it, but he was constantly talking about the things that made it different from other cars. I started to think that he was just overly excited about his new ride even months later and did not really realize the impact that this car has (until I had my own personal experience – but more on that at a latter time). I totally expected her to shoot down the idea of a Tesla, but then she told me one of the CrossFit coaches had one at her gym and was constantly going on about the car.

I had two main concerns with the electric car – range and power. I wanted a car that would go when you step on the accelerator and I also wanted to be able to drive from Phoenix to San Diego/Los Angeles/Las Vegas without worrying about where to charge along the way. So I did my research and quickly realized that Tesla had already mastered both of these concerns. Great, on paper it all looks good, but what is driving one of these cars like? Well, her coach agreed to answer any questions and take us for a drive. By the way, in the event that you do not have a friend that has one, you can also schedule a test drive at the Tesla showrooms. The nice thing about Tesla showrooms is that they are not like your typical car dealer – they will not try to hold you hostage until you make a deal and they will not bug the crap out of you via phone calls and emails after you manage to escape.

Getting to ask her coach about the car and having the overview from an actual owner was very informative and enlightening. Once you have one, you become a brand ambassador and realize how Tesla owners are Tesla’s advertising department. He gave us an overview of the car on everything from features to charging and even showed us the cool summon feature (it was just the forward and backward at the time – before they came out with smart summon). His configuration was a 2019 Model 3 Long Range Dual Motor with a rated range of 310 miles (at the time – it has since been increased). We hopped in and when for a drive. It was quiet and quick. It pushed you back in your seat. After a short drive, he jumps out and lets me drive. The acceleration was amazing (even comparing it to my 911 Turbo) and was rated for 4.4 seconds 0-60. The regenerative breaking was easy to get used to and is a neat feature that stops the car and uses that energy to recharge the batteries. Once you master this, you rarely have to touch the breaks.

He also had the Full Self Driving option and enabled it for me while I was driving. My 2017 Honda Accord Touring has steering assist, but the Tesla FSD is on whole different level. Just enabling it this one time, I was sold on that feature (it was $5K at the time and has since gone up a few times). My wife passed on driving the car since she gets nervous about driving other people’s cars. I really did not want the test drive to end as I was really getting used to the car and how it drives (plus, the acceleration never gets old). Before the test drive, I was 95% sure about the Model 3 and afterwards I was 100% and ready to buy one.

That evening I went on NextDoor to find a reputable electrician and had my garage wired with a 240V/50A circuit that had a NEMA 14-50 plug socket. 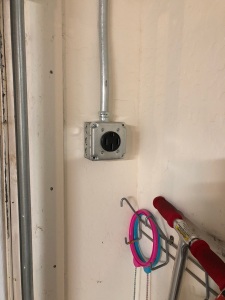 This will only charge the car at about 3 to 4 miles/hour. Be sure to order the correct plug adapter ahead of time (in my case I needed the NEMA 14-50). Sometimes they have them in stock when you take delivery of the car, however, they were out when I took delivery so I recommend ordering one in advance from the Tesla shop.

I also started getting the 2009 Honda Odyssey ready for sale. After a couple of weeks and zero interest in the Odyssey, I decided to bite the bullet and trade it in (yes – Tesla will take trade ins!). I went ahead and placed the order for the Model 3 and also specified that I had a trade in. Having had plenty of experience with other car dealers over the years, I was expecting the process to be painful. However, this is something else Tesla has raised the bar on. Within a matter of minutes I had placed the order online (using her coaches referral code of course!), including the details of the trade. Also, you will not get much for your trade and you have the option of opting out of the trade if you decide to sell it yourself. That way you can see what they will give you and then you can make your decision on how you want to proceed. Ordering was quick and easy. I placed the order on Friday, May 17th, 2019 and the next day I received a text message saying that my delivery date had been set for Saturday, May 25th 2019. On Friday, May 24th 2019, the Tesla delivery center called and said that the car was ready if I wanted to pick it up a day early (absolutely). So my wife and I made the drive to the delivery center and one last drive of the Honda Odyssey.

Having bought other new cars, I was not sure what to expect. Usually these things take a minimum 2-3 hours especially if you are trading in a vehicle and/or financing the new car. Things were all ready to go once we arrived. We had some paper work to sign, they took the keys to the Honda Odyssey and checked it out, and then we were on to the new car orientation. This is where they show you how to operate your new Tesla and get your phone app set up so you can actually unlock and drive your car. I think all of this took a total of 45 minutes and we were back on the road heading back home. The car buying experience is like no other and it was actually enjoyable instead of dreadful. 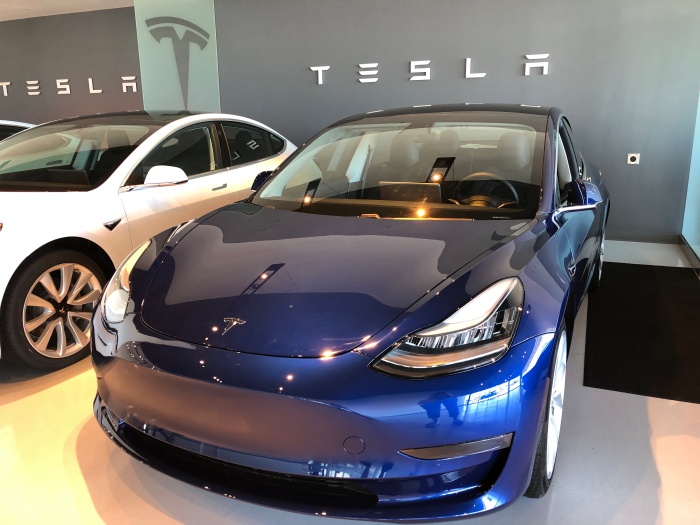 And much to our surprise, this car just keeps getting better and better with the over the air (OTA) updates. If you are planning on ordering a Tesla or Solar, feel free to use my referral link for some free Supercharger miles or cash award for Solar.

If you have any questions, feel free to leave me a comment or you can also find me on Twitter @miketerrill.

And this is only just the start of my Tesla journey. To be continued…

2 thoughts on “My Tesla Journey”